Bella turns 22 today and we want to wish her the best of birthdays! We wish happiness, health, love!

October 06: at the airport in Toronto, Canada 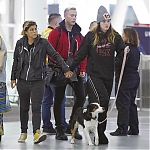 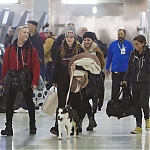 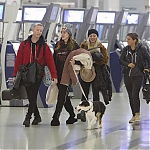 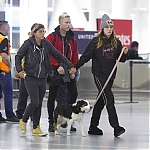 Bella Thorne has been honored a handful of times in her career. In 2015, she scored a Teen Choice Award for Choice Movie Villain for her work in the teen comedy The Duff, her first and only surfboard prize out of seven nominations. The 21-year-old former Disney Channel star has also been feted with Young Artist and Young Hollywood awards from various voting groups, and now comes word that she’s poised to take home another prize for her mantle.

“I’m excited for visions of beauty like this to be shed in a new light,” Thorne said in a statement released with the today’s news. “Breaking the taboo of what’s classified as beautiful has always been a vision of mine and it brings me such joy to see this being recognized for what it truly is…beautiful visionary art.”

She previously said in an interview that her inspiration for the film was Gaspar Noe’s graphic film Love, which screened at the Cannes Film Festival. “It’s a little bit on the psychological side of like a cat-and-mouse game that I really liked. And I think that speaks for a lot of our male versus female constantly when it doesn’t really need to be like that, but there’s always this level of dominance and submissive and how that plays such a big role in general in life, so I wanted to do something like that. So I brought it into a sense where you could really see it so it’s physical,” she has said. “I didn’t wanna just do a sex scene that felt kind of like we’re copping out, in a sense. Like, ‘Oh we can’t show this and we can’t show that, so we’re just gonna like do a little fun thing with the camera.’ That’s like not the style I really love. I really love the movie Love, so that was one of my references for when I shot it. I like that style of just being really realistic.”

As for Thorne, she recently released a book of poems, The Life of a Wannabe Mogul: Mental Disarray, as well as a cannabis line. She continues to act, mostly in independent films such as the upcoming Southland, Leave Not One Alive and Girl.

Welcome to Adoring Bella Thorne, your newest source dedicated to Bella Thorne. We aim to provide you with the latest news updates, photos, and all kinds of stuff for all Bella fans to enjoy. Please look around, stay a while, tell your friends. Thank you for visiting we hope that you come back very soon!