Bella Thorne on Therapy, Owning Her Pansexuality and Dreams of Building a Hollywood Studio

Bella Thorne isn’t one to lie. In fact, the former Disney child star (she appeared alongside Zendaya on “Shake It Up”) lives her life in the open. From sex-infused music videos to her tell-all memoir, “The Life of a Wannabe Mogul: Mental Disarray,” the 23-year-old calls honesty “the strongest form of currency.”

She recently dropped the video for her single “Phantom.” The look and feel, Thorne says, is inspired by Guillermo del Toro, Tim Burton, David Lynch and “The Twilight Zone.” It’s also a good look at how her mind works. “My first book was called ‘The Life of a Wannabe Mogul: Mental Disarray.’ I literally say this is what the inside of my brain looks like,” Thorne tells me over Zoom from her Los Angeles home. “Shit is everywhere. Thoughts are coming out from random places and orifices I didn’t even know I had. And it really works its way into my professional life, for sure. Whenever I’m doing videos, whenever I’m writing, I’m just like, ‘How do we push this,’ and me watching it to be so visually, I don’t know the word, in awe.”

Thorne, who identifies as pansexual, recently announced that she and Italian musician Benjamin Mascolo are engaged to be married. “I don’t even know what I want in my wedding. I’ve never even thought about, ‘What do you want at your wedding?’ she says. “We’re doing two weddings, one in Italy and one here. He lives in Italy. I think the Italy one will probably be more like flying in crazy things, just craziness. Let’s have some fucking fun. Then I feel like maybe the American one might be a little bit more serene, and a bit more traditional. Not that anything with me is ever traditional. I know what I want, for a fact, is hanging, dripping flowers and vines everywhere. Every orifice of every surface, everything. I don’t care where they don’t fit, fit them.”

What’s your second book going to be about? You really put yourself out there with the first one.
I figured out the name. I haven’t told anybody. I’m going to tell you right now, because I love the name. I think that I should call it “Mental Rehab” since the first one is “Mental Disarray.” There’s all these things that I talk about in the first book that are quite dark. With the format of this book and the messiness of the last one, I’m going to completely change the format so that at the beginning of the book, you can see what mental disarray I was still in. By the end of the book, everything’s so much cleaner, in place, like my brain should be by the time I’m at the end. It’s just going to be about me working on so much shit mentally. Finally, this will be my first time ever going to therapy as well this year. I have my first therapy session on Monday. So I’ll be writing a lot about that and just the mental changes I want to make to grow. I just don’t want to be myself, I want to be this better version of myself that I know I can be. And I just need to do the mental work to get to that place that I want to be, which is happy, not always dealing with depression.

You just got engaged.
He did it on our movie that we did together, which is his first time ever acting, and my first time working with someone that I’ve dated. It’s just such a big first for us, especially for our relationship, to see how we can actually really work together on set, all day long, talking about the stuff, going through these scenes, going through hard scenes. It was such a great testament to our relationship to really just see how easy it is for us to mentally give and take from one another and get on the same page. Then when we were doing re-shoots in Spain and he asked me on set. It was very, very cute. It was so sweet.

I talked to your ex Tyler Posey the other day and he credits you with getting him on OnlyFans.
My production studio Content X works with Tyler. We shoot his content. The company has just completely outgrown itself so quickly. I finance everything. And to have a company that completely finances itself within five months of being up, I’m like, “When have you heard that?”

You’re 23.
I got four years to open up my own studio lot. I’m finally signing my production deal on my show that I wrote, that I created, that is my baby, that I’ve been writing since I was 18.

How often are you hearing from other young, queer kids saying, “Thank you for being you. Thank you for being out. Thanks for just living your truth.”
All the fucking time, but it makes me so happy. It’s usually the kids that have been soul crushed throughout time, told they couldn’t be themselves, told they couldn’t be this or that, and everything else but themselves. It just makes me just so happy that they feel this connection and that they feel heard. It’s every single reason why I put out the fucking book. I think honesty is the strongest form of currency. When I came out on Twitter was before it was super, super normal to be out, and especially in Hollywood. And I remember it was hard with jobs, it was hard with people in meetings. And I can’t even imagine being a gay man because people look at me and they go, “Oh, well, she fucks men too, so it’s okay.” Because I’m pans. And I’m like, “Okay.” And they’re like, “Okay, well, you know what? She’ll just basically fuck anything, I guess. So it’s fine.” I just can’t imagine the pain that so many people that I’ve looked up to and worshiped for years have gone through in this industry wanting to be themselves. I remember everyone calling me at the time when I posted that on Twitter, and everyone was saying, “Bella, do you know what you just did though? Do you know how this is going to affect you?” And I was like, “What’s it matter?” I was like, “Don’t be an idiot. They’re going to get photos of me. Someone’s going to pap me making out with that girl. Someone’s going to fucking say something. I’m not a liar. They’re going to see it. It’s going to blow up. You’re expecting me to lie my whole life. Is this what I’m hearing on the phone? What’s it matter? What’s it fucking matter? Even if it sucks for a little bit, at least I did it and I don’t have to lie anymore or worry about it.”

Hello. Bella released a new music video for her new song ‘Phantom’. Check it out! 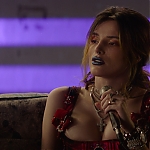 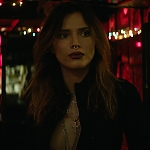 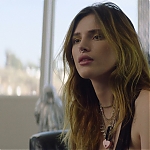 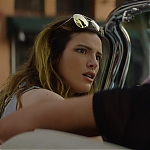 Bella Thorne Is Engaged to Benjamin Mascolo: ‘She Said YES’

Lights, camera, engagement! Bella Thorne revealed on Sunday (March 21) that she’s engaged to boyfriend and co-star Benjamin Mascolo. She shared the news in a series of Instagram stories that kicked off with a “How it started” photo of the Italian singer, followed by a photo of the couple showing off the singer-actress’ engagement ring.

Over on his own Instagram, Mascolo — who revealed their happy news on March 20 — shared a mini gallery of the couple showing off her sparkly new pear-cut diamond and kissing, captioning it, “She said YES.” He also posted a video in his Instagram Stories of the “Watch Me” singer reacting shortly after his proposal.

“Thank you for being amazing, baby. I love you so much,” he says in the clip as the actress giggles emotionally while showing off her ring. “Now we’re getting married! Soon, hopefully! Celebration in Italy and America both.”

In a subsequent Instagram Story, Mascolo revealed that he popped the question while working on their upcoming film Time Is Up. “I wrote the love letter on the back of the script of our movie,” he explained in white text written on a black background. “At the end of the last scene, she was at monitor watching with the director and.. surprise.”

The next Story was a page from the script, the the imprint of his writing clearly visible through the sheet of paper. He captioned the image: “The back of the letter.”

According to reports, the two have been dating for nearly two years.

The actress, who revealed on Good Morning America in July 2019 that she is pansexual, split from Tana Mongeau and Mod Sun earlier that same year.